Once upon a time a ghost-seeing, revenge seeking, Shakespearean Hero proclaimed, “Frailty, thy name is woman.” Since he had not met this trio of Messbari Project, armed with their street directories, invincible spirit and pepper spray, I am going to meekly forgive him for his misconceptions. Before our project of unraveling the mess of Messbaris in Kolkata had started, we knew that our journey will be different, and will be occasionally shaped by the fact that we were three young women “taking to the streets”. But that is a story I will tell you later, for now, tell me when you think of messbaris, what are the images that come to your mind? Bachelors’ den? Overconcerned landlords who will out-father your own Father? Shyamal Mitra prancing around singing, “Amar e joubon…” along with other boarders in 72, Banamali Naskar Lane? Either way, you and I, we can both agree, that the very idea of messbaris in Bengali consciousness is a space that is strictly occupied and maintained by men. And that is true, mostly. So this International Working Women’s Day we are going to break that stereotype and narrate the stories of Four messbaris of Kolkata that are or were owned and run by women autonomously. These women are powerful, protective and efficient, and awe-inspiring.

We will start off with the story of a now demolished Mess-bari, Shabari and its erstwhile owner Mrs. Beauty Bose. Situated right adjacent to Purabi Cinema Hall, which is now demolished as well, this was a women’s only mess, or a Ladies’ Hostel. Started during 1969-1970 by Mr. Arun Kumar Bose, the management was promptly taken over by his wife, Mrs. Bose, and this will continue for the next 38 years, until the hostel was closed down, because an aged Mrs. Bose could not continue with the mammoth responsibility of running a mess of more than 40 boarders all by herself. As Mrs. Bose said that running an all-women’s hostel was anything but cakewalk. Not only was she their local guardian, but more of a bodyguard. “I have warded off letches and creeps literally by chasing them with sticks in my hand. I even had to negotiate with the local political leaders. For 38 years, I had no life, I would spend every waking hour tending to the girls, looking after them, feeding them, recruiting cooks and maids, maintaining the mess, I had no separate existence, no family outside this hostel,” sighed Mrs. Bose. Mother of two sons, now she has the time to breathe peacefully, but has confessed that she secretly misses scaring off “Romeos” ministering over her hostel.

Now we will venture into the realm of those mess-baris where women have controlled all-male spaces, single handedly and successfully. The 5/1A, Madhu Gupta Lane, is now owned and managed by Mrs. Anjana Mukherjee, whose husband had owned the place, but died many years ago. Now she looks after this 76 year old mess, housing 14 boarders, students and office-goers, much like Mrs. Uma Bhattacharjee of Rainbow Club. She inherited the ownership and management of this 70 year old mess on B.B. Ganguly Street, from her father-in-law. Now in her late 60s, the formidable Mrs. Bhattacharjee stays in a part of this four-storeyed mess, adored and feared by her boarders, simultaneously. Nripendra Boarding House of College Street was started in the 1950s. This place originally owned by the Benares Trust, is run by lease-holders, who currently is a woman. After the death of the primary lease holder, she along with her daughter, has been managing this mess of 24 boarders, with no grievance from the boarders whatsoever.

This International Working Women’s Day, let’s celebrate these women of great strength and conviction, who have risen above their gender-roles, assigned by the society, dealt with the “man’s world”, and made their places in it. They live unobtrusively right next to us, they don’t consider their stories to be worth telling and go about the world, making changes they don’t themselves realize. This March 8th, let’s make this day of women whose stories are untold, and unseen, who are devoid of the fancy rhetoric, let this day be of women, queer, trans, disabled, rural, tribal or of any other marginality. Let’s celebrate the woman, fighting her battle, right next to us.

Early one morning, out on our exploration through the narrow streets of North Kolkata, an interesting conversation with a curious local led me to delve deeper into the meaning of Heritage and Conservation within an Indian context.

Armed with our smartphones and cameras, we traversed various streets and alleyways, clicking away furiously at anything and everything that caught our attention. One of the perks of this project is undoubtedly stumbling upon remnants of Old Calcutta’s glorious past, something we may have never explored otherwise; classical mansions, delicate iron railings, slender balconies and colourful glass windows stained with the vestiges of time.

While we stopped and admired these buildings ever so often, bemused locals passed us by, trying to follow our line of sight and wondering what made our faces light up. The stark difference in our reaction to these buildings as opposed to the rather nonchalant nature of the locals served as the premise for many a conversation amongst ourselves. While standing outside a boarding house on Sitaram Ghose street, we caught the attention of a home-owner who was seemingly surprised with the subject of our attention. We discussed the premise of our project with him and he was quick to revert back with something along the lines of, “but temples and monuments are heritage buildings, a messbari is not”.  While my initial reaction was one of infuriation, it took me a while to understand that coming from a background of Conservation handed me a certain privilege of knowledge and understanding as opposed to the locals, who were made to believe that their humble ancestral homes and neighbourhoods had little to no place amongst India’s varied heritage landscape.

How often do funds and manpower repeatedly get poured into structures and monuments of international acclaim while the neighbourhoods, or the veins of the city, languish under disregard and disrepair. Is it through a select group of elite buildings that we wish to present an image of our country, while the real character of the city lies under a shroud of perpetual gloom? There may well be no end to this line of thought and the many discussions that it could foster but let’s limit our scope to that of Calcutta’s messbaris.

As discussed in earlier posts, the mess-culture was the cornerstone of late 19th and early 20th century Calcutta. While on one side there were the intellectuals: poets, authors and the like, developing some of the greatest works of Bengali literature, many boarding houses were dedicated to people from India’s varied communities such as the Marwaris, Muslims, South Indians and even the Scottish and Europeans amongst others. Calcutta’s cosmopolitan nature during its heyday, as the capital of the British Empire, can well be understood by the differing nature of its many messbaris. At a time when these very characteristics of the city are being questioned, it is imperative that initiatives such as the Messbari Project are encouraged and undertaken so as to shine a light on the many carriers of Calcutta’s illustrious past which otherwise may be fading, and fading fast.

Mess baris, the quintessential boarding houses, had been part and parcel of nineteenth and twentieth century Kolkata’s checkered past. Interestingly enough, Permanent Settlement acted as a catalyser to the development of such boarding houses. Land subinfeudation led to decreased earning for the landowners and in certain dire cases, landlessness. These push factors led to large scale migration to Calcutta, the colonial capital. Hordes of young men thronged the city in search of educational and professional opportunities. In order to accommodate this never-ending trail of fortune seekers, boarding houses sprang up in and around the major educational institutions and business areas.

END_OF_DOCUMENT_TOKEN_TO_BE_REPLACED

In his seminal work ‘Sei Somoy’, Sunil Gangapodhyay talks about the emergence of mess baris or boarding houses in colonial Calcutta. In this excerpt from The mesmerising confluence of history and fiction, we see the mention of a couple of early mess baris in the Boubazar area, including the one allegedly inhabited by the social reformer Iswarchandra Bidyasagar.

The accompanying pictures are from ‘Sei Somoy’ and ‘Those Days’, the former’s English translation.

Excerpts from Partha Chatterjee’s ‘The Nation and its Fragments’ documenting the day to day functioning of Mess Baris or Boarding Houses. Chatterjee here refers to the Indian National Congress leader Bipinchandra Pal’s anecdotes to illustrate the decision making process of such Mess Baris. 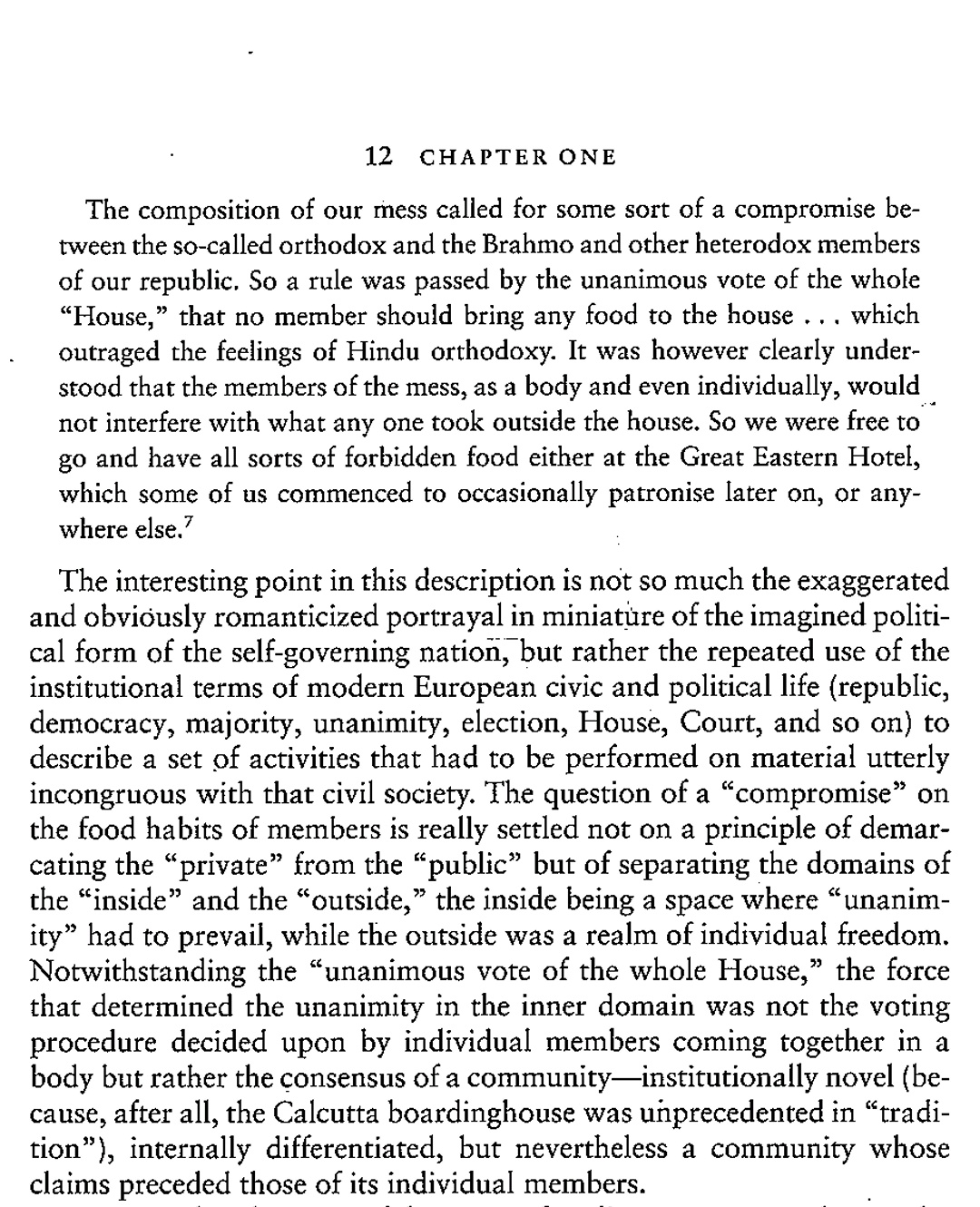 Three brilliant early career researchers with complimentary skill-sets will work on Heritage Walk Calcutta’s The Messbari Project. Here is all that you need to know about them.

Barshana completed her graduation in History from Jadavpur University and is currently pursuing her Masters in History from the same. Her areas of interest include the sociopolitical and cultural history of Kolkata in the colonial and post-colonial period, its built spaces, and migrant communities. She also harbours a strong penchant for Gender Studies. She’s a Citizen Historian with the 1947 Partition Archive. If not buried under a pile of books, she’s most likely to be found loitering around the labyrinthine alleyways of Kolkata, clicking pictures of odd edifices.

Dipanwita is currently pursuing a Bachelor’s degree in English Literature from Jadavpur University. She has undergone training in the ethics of ethnographic practice and conducted some ethnographic interviews as a part of her course at JU, which she brings to this project. She is a queer feminist activist, working closely with the survivors of gender, sexual, sexuality and class-based violence. She is a member of a student-driven forum fighting against sexual harassment in educational institutions and workplaces around the world. She is a freelance content writer, likes to dabble in poetry and singing from time to time and hopes to topple patriarchy very soon.

After her stint as an intern during her B.Arch studies, Anmol resolved to steer clear of commercial architecture and chose to couple her interest in history with her passion for built heritage to pursue an MSc in Sustainable Building Conservation from Cardiff University, UK. As a fresh graduate, she plans to initially involve herself in projects aiming to create heritage awareness as she believes that that is something India still lacks. She hopes to build her way up towards starting a Conservation based firm of her own and also looks forward to teaching the subject at architecture schools across India.​

Join us to wish them all the very best for the valuable work they will be undertaking in recording old boarding houses in Kolkata  in the next two months.

The Messbaris, or traditional boarding houses, in Kolkata are in a state of rapid decay. In Calcutta’s cultural and economic heyday in the early and mid-20th century, the messbaris provided much-needed affordable accommodation in the city for young bachelors, many of whom would go on to become famous in the fields of literature, academics, or sciences. The vibrant “Mess-culture” became central to a number of Bengali novels and inspired Bengali movies. While many of the old boarding houses still survive, they are often at-risk structures that face demolition, which makes recording them imperative.

While working on our first Sutanuti Diaries episode on Kolkata’s old messbaris (see below), we realized that no tangible record of the location and history of the boarding houses exist. The objective of the current project is to create just that as a first step to stir public awareness about the boarding houses and hopefully generate interest in conserving them. The Messbari Project is also an attempt to question the narrow Bangali-oriented definition of boarding houses and extends it to look at similar institutions used by other communities in the city.